The Balloon Embolectomy Catheter is a great example of simple inventions resulting in a powerful medical breakthrough. This invention pioneered minimally invasive vascular surgery, and extended life saving procedures to ten’s of millions of people. 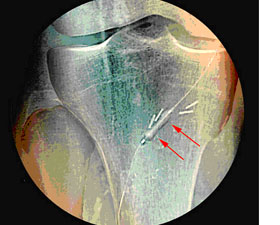 Surgeon Thomas J. Fogarty, M.D. as professor, inventor and entrepreneur, has saved tens of millions of lives by pioneering the tools and methods of less invasive vascular surgery. Before earning his MD in 1960 from the University of Cincinnati Medical School, Fogarty had conceived and designed his most significant invention. The Fogarty Balloon Embolectomy Catheter is, like many revolutionary medical innovations, simple in concept.

It is comprised of a hollow tube about the width of a pencil, with a small inflatable balloon attached at tip. The catheter is inserted through an incision into a blood vessel, and pressed through a blood clot; the balloon is inflated, so it can displace the clot as it is extracted from the vessel.

Fogarty built the first prototype in his attic using his boyhood fly-tying kit familiar to him from his regular fishing trips. Employing his dexterity he attached the fingertip of a latex surgical glove to the hollow tube. Fogarty’s balloon catheter procedure was the first successful example of “less-invasive” vascular surgery.

Since its introduction, Fogarty and many others have developed numerous spin-off applications. The first balloon angioplasty was performed with a Fogarty catheter in 1965. Fogarty has also adapted his catheter to less invasive biopsy applications.

Back to Innovator Index

Click on Invention Roadshow Registration to present your medical invention.